Last Sunday in Estonia was filled with… everything: tough battles were changing one after other, mechanics had a list of tasks to perform, making sure that damaged cars would continue racing. Meanwhile, racers were doing everything in their power seeking to get all the points possible. As summer is about to ‘expire’, it is time to check the points scored and the victories gained along with changes after this particular “Parnu Summer Race”.

“Nankang Endurance Academy“ with 18 teams on a grid

Endurance newbies or mini-endurance participants of Nankang Endurance Academy have filled the grid: even 18 teams have shown up for this event. It seems that these series are getting their fans each and other event and in between of them. Real battles, real tension and great victories among different classes.

Considering incidents and accidents – it was quite well spend time by all the teams, avoiding big damage, mostly fighting for the victories by driving, instead of fixing the cars.

Victory in “BMW 325 Cup” classification was taken by “Papa’s Racing Team“ moving straight to the fourth position after these gained points. “KTK Racing” team took the second place during the race, strongly holding on to the leader position in a season classification. As for the third place, it belongs to “WRR” team from Latvia.

“BMW Masters” group – totally dominated by Estonian racers. First place in the event and the second in a season scoring table after points received belongs to “EST1 racing 73“. However, “Reinup Motorsport” team holding on their first place this year took second place in the race. The third in a both, season and event, belongs to “EST1 Racing 77“ team.

“BTC2“ class had (and still has) the most attractive battles! Racing teams were trying to keep up right until the finish flag was waved. At the end, the first place was taken by “Helios-Sauda Racing” team: these guys had some serious technical issues during first two rounds. Finally, points gained allowed them to move to the third place in an overall season classification. The second place in the event was taken by “Lind Racing”, holding the leading chair in the seasons’ classification. The third during the race and the second in the championship now belongs to another Lithuanians – team “AKTO”

Among “BTC3” classifications’ participants, the leader position in the event and season overall is taken by “Diesel Power” team. After all important points were calculated, the second one belongs to “Joujaam” team, and the third one still belongs to “Rednut Racing Team”.

Meanwhile, the leader of “BTC4” is still considered “DHL Racing” team, even though they did not take a part in Estonia. Right after them, there is another Lithuanian team “Dock by 222”.

Brand new and fresh class of “BaTCC” has been growing since showing up this year only. New, attractive and quite competitive class gathered 13 participants in a grid. Among them – new racers and well-experienced ones. However, we all should remember, that in this kind of sports – we have not only racers participating, but cars, too. Some of them might show their character, quite disturbing the attempt to reach the victory. This kind of situation occurred during the first run and Ramūnas Čapkauskas was not able to start, losing points and victory. At the end, Toms Berzins took the first place, jumping to the 7th position in a seasons’ classification. Great performance of Matīss Mežaks led him to leader chair in a season, moving R. Čapkauskas to the second place with two points gap only. It looks like the best drivers will be clarified during final event in Riga only.

As for “BGT AM” class, first place in an event and all this season belongs to Edvinas Einikis, Vilnis Batraks is an owner of the first place in the “BGT PRO” classification and Ģirts Krūzmanis owns the leader chair of “BTC1” class. However, the gaps between other classes are too small yet: the season fastest will be known after final round, for sure.

A lot of cars were damaged during races of other “BTC” classes. Both season leaders Karolis Gedgaudas and Julius Skirmantas have stopped in a track during the first run due to the technical issues, so the biggest amount of points was given to Tadas Petukauskas. He also kept the third place in season classification.

As for “BTC3” class, the leader and this moment – Aurimas Mištautas. Danas Azikejev took second place during the round in Estonia and the third in a season classification. The second place in a season belongs to Tautvydas Andziulevičius: he took the 3rd place after both races in “Auto24ring”. “BTC4” class still has the constant leader from Finland – Jyrki Jonkkari.

This season, “TCR Baltic“ class winner will be determined by summing up points of two rounds: the particular event in Estonia and the upcoming event in Riga, happening in October. So, just to clarify – each and every point matter.

The battles between the participants have started during the first lap of the first race already. Due to some kind of technical issues, Girts Kruzmanis (driving Audi RS 3 LMS) lost a control of a car, hitting Kestutis Stasionis VW GTI TCR and touching the VW of Ernesta Globyte. These two racers were forced to change their trajectory, hitting to each other. Afterwards, Ernesta Globyte was stuck in a grass next to the track with the rim being broken. As for Kestutis Stasionis, he managed to reach the pit box and repair area. However, these two racers lost a possibility to get the podium during the event and some important points in a season standings. After this first round, Girts Kruzmanis is happy to be a leader, second place in both, season and event – taken by Rokas Kvedaras. Third place belongs to Estonian racer Peeter Peek, racing Honda Civic FK2 car.

Final battles of these championships and cups are going to happen at the beginning of October, making clear who are the champions and winners. 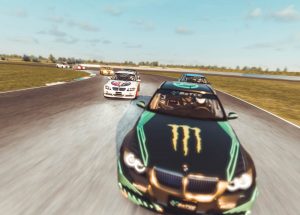 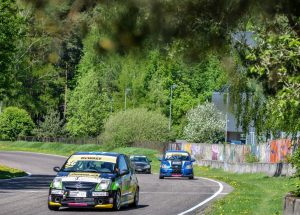 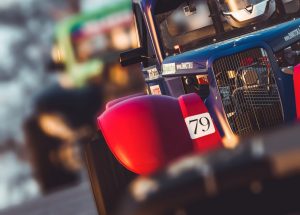